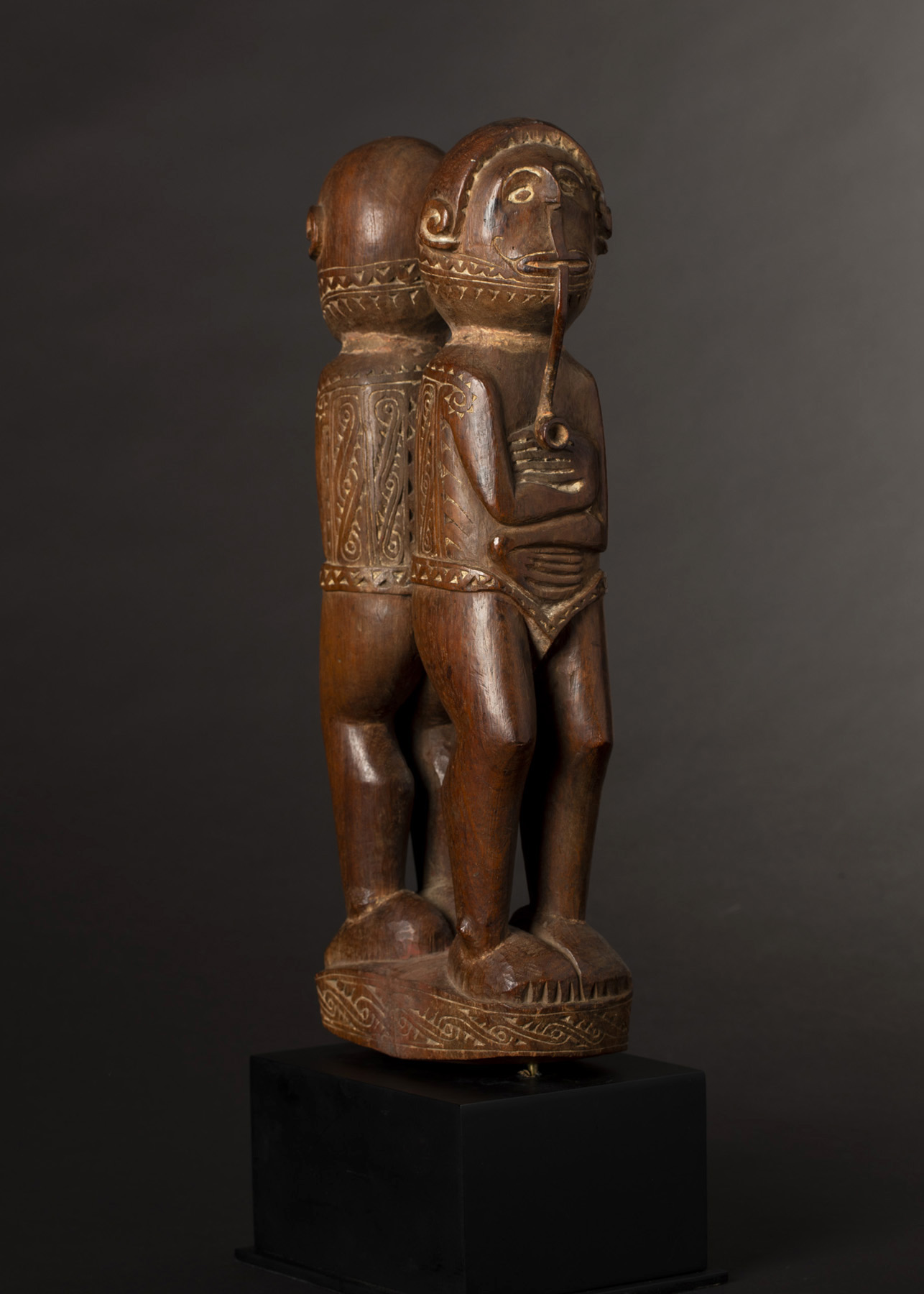 This superb Massim Figure was carved by a known Massim carver Banieva who was also from the Suau area in the Milne Bay Province in the far Southeast part of Papua New Guinea.

In Papua New Guinea where virtually all of the many thousands of Master Carvers remain unidentified Banieva and Mutuaga are rare examples of known master carvers whose work has been admired and collected since the late 19th Century.

Born in the 1860’s Banieva lived and worked in the Suau District in the Milne Bay province of Papua New Guinea.  Banieva would have known the other famous Massim master carver of that time Mutuaga.  It is a miracle that there is a photo of Banieva caring above this photo is from the book Mutuaga: A 19th Century Master Carver by Harry Beran : Wollongong University Press 1996

Banieva carvings are unique in their stylised representation of ancestor figures, several of his artworks can be seen in the book  Mutuaga: A Nineteenth-Century New Guinea Master Carver: Wollongong University Press 1996 Page 233,  these show the unique style of the incised hands held to the chest. There is also a photo of Banieva at work carving in the same publication on Mutuaga page 215 Plate 49.

We are also fortunate in the extensive research and writings of the art historian Dr. Harry Beran who has studied Massim Art & Culture over 60 years.

This finely carved Janus Ancestor Figure by Banieva is quite unique it shows two men standing back to back on a shared oval-shaped base. both are smoking tobacco in pipes.  I personally love the way the hands are done in a very stylised manner. There is finely incised decorations on the body and base and face and the designs have been highlighted with white lime infilled into the designs.

Figures by Banieva are extremely rare & most are in Museum Collections. This is the only example I have owned or I have seen in private hands.

Some of the finest carvers on the Island of New Guinea came the Massim Culture in the Milne Bay Province of Papua New Guinea. These artists are well known for their amazing Lime Spatulas and Wealth objects but their early figurative art is less well known. In Pre-European contact times the Massim certainly the made and used ancestor figures for traditional use in ancestor worship, soon I will list another Massim Figure that was known collected by Captain Thomson in 1896.