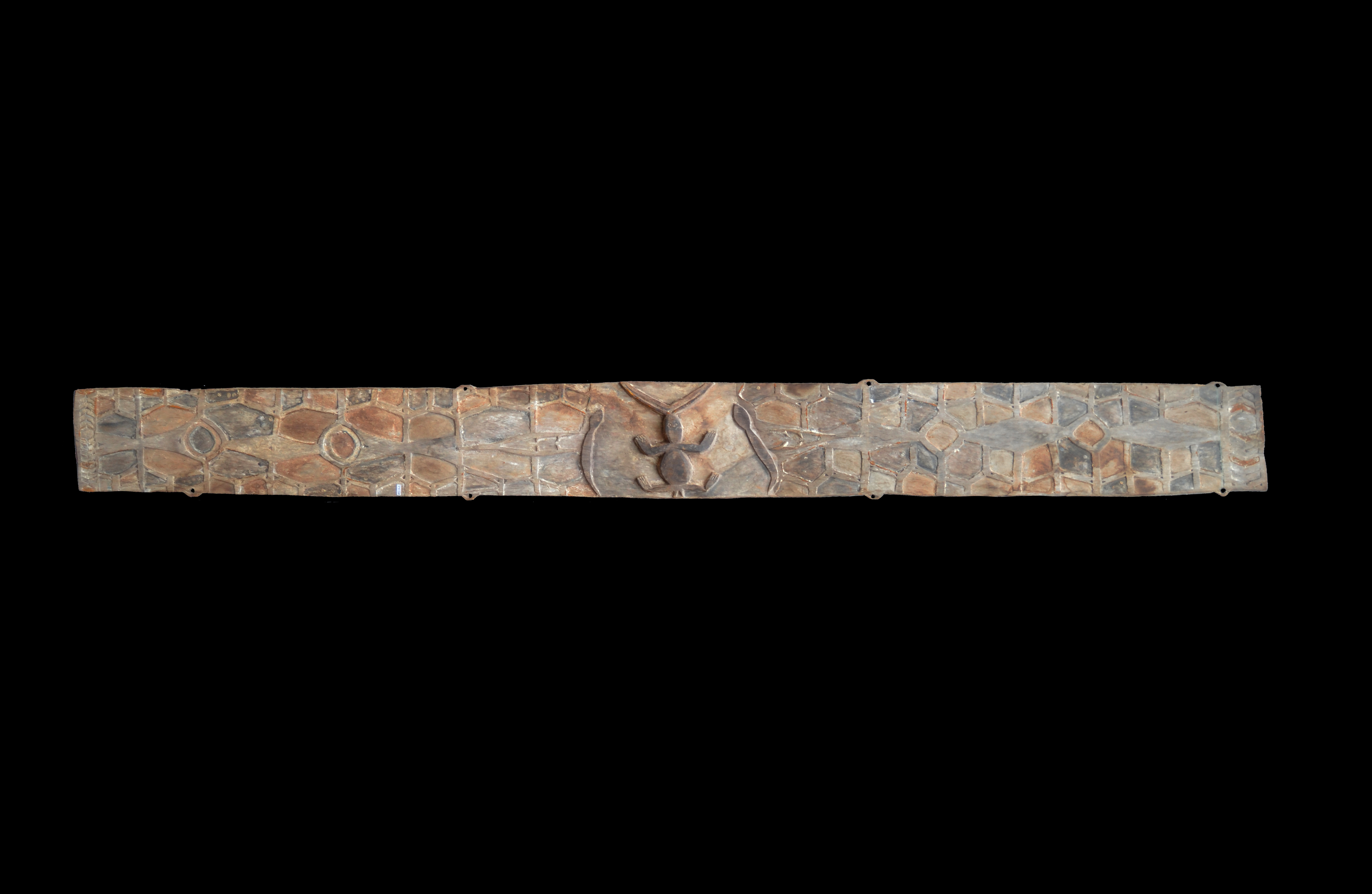 This beautiful Ceremonial House Lintel  is from the Kamoro people in the Eastern Mimika Area on the South Coast of West Papua Irian Jaya Indonesia. The lintel is also an Ancestor Board called Yamate which is a two dimensional ancestor figure. Yamate Ancestor Boards were finely carved in different forms and have incised & painted designs that reflect the clans own ancestors.

Much of the art of the Kamoro people of southwest New Guinea centres on ceremonies and wood carvings that honour the spirits of individuals who have recently died.  Portraying recently deceased ancestors, Yamate were primarily created during the emakame, a complex ritual honouring the dead and celebrating the renewal of life. A pivotal event in the Emakame was the revealing of a group of Yamate, each of which represented a specific deceased person, whose name it bore. Some Yamate were also used on festive occasions as ornaments on the prows of canoes.

The Kamoro are also referred to as the Mimika, they are related to the Asmat their neighbours to the east. The Kamoro people were tired of the endless headhunting & revenge with the Asmat and they moved up the coast out of easy reach of the Asmat headhunters.  The Kamoro art reflects their more peaceful and gentle nature.  Their artworks are more subtle than their Asmat neighbours & they use colours  and designs that are not found in the Asmat area.

In the early 1980’s I spent several months living with the Kamoro in two villages in the Eastern Mimika area. These long visit were the opportunity to really get to know people well & to be invited back to attend traditional ceremonies for The Mbitoro Ancestor Poles, during these ceremonies that last up to 1 year there were Yamate made and displayed outside the amazing ceremonial house made from the ceremonies. I have included a couple of field photos from this time.   The monumental Mbitoro Ancestor Poles (about 6 meters tall)

This Yamate along with other carvings collected over a 2 year period in 1985-1986 and most of the objects collected are now in major museum collections around the world like the Musee du Quai Branly Museum in Paris. When you walk into the Oceanic Art Pavilion the first thing you see are monumental Ancestor Poles from the Asmat & Kamoro (Mimika)  along with a Soul Boat , Shields and dance costumes from the Asmat & Mimika, all of those artworks were collected by me at the same time as this Yamate.