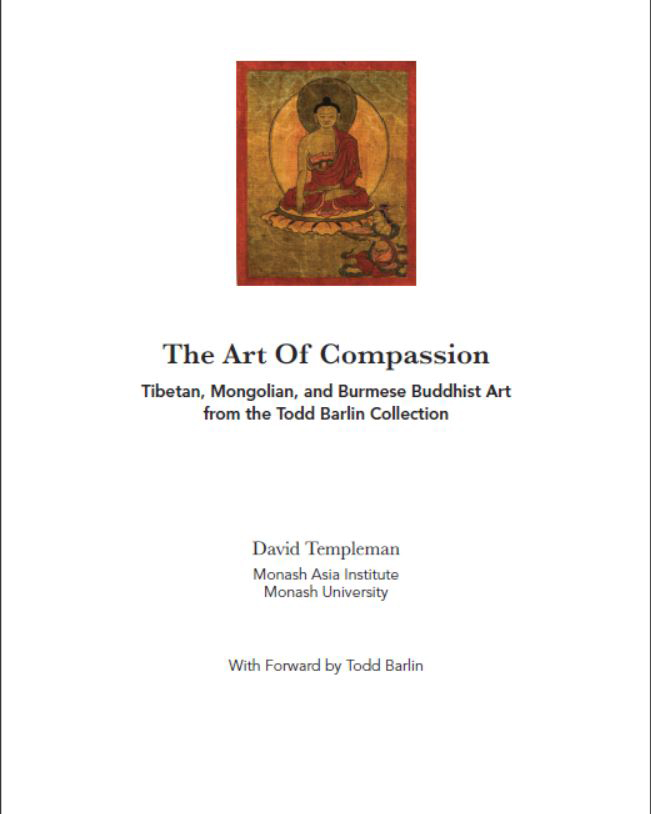 This pair of two large size Tsakli Paintings are from Bhutan.  Finely painted with polychrome pigments on thick handmade paper. Dating from the 19th Century & in very good condition. In the 35 years of my collecting Tsakli these are the only two fine examples I found and kept for my collection.  Here is their descriptions:

Left: A guardian figure belonging to a group known as Tsen. These local deities haunt rocky outcrops
and many have been subjugated by Padmasambhava and act now as protectors of particular sites,
temples, mountains and so on. It is claimed that before their conversion, Tsen were the lost spirits of
monks who had broken their strict tantric vows. In their painted form, all Tsen are red-coloured and it
is their hand-held items that distinguish them.

Right: Garuda holding a snake, against whom he wages permanent war. The snake deities are said
to protect the ‘Perfection of Wisdom’ teachings in deep underground waterways and resent anyone
accessing them. Garuda in his war against the snakes is, in a manner of speaking, liberating wisdom
and is therefore considered a highly auspicious deity.

Both are mounted in a single row on museum archival card in dark blue, they are ready to put into a frame or your choice .

Buddhist teaching is not something learned from books, although they certainly play a part in reinforcing what one has already learned. The prime way of learning in Tibeto-Mongol Buddhism is through one’s master’s words. A common sentiment in those lands is that, without a fully qualified master to transmit them, the Buddha’s teachings may well never have existed.In learning the many complex rituals involving sometimes hundreds of deity forms, their names,iconography, secret syllables and so on, a student must have a teacher who almost always transmits this information orally. As an aid to memory, especially where complex deities are to be learned, small cards representing these myriad forms are shown by the master to the teacher, and the details, often found on the back of each card, are read aloud by the teacher with the intention that the student retain the details in their memory. These small cards are called tsakli or tsakali. When a deity form has been fixed in the mind and one has embarked on the path of Buddhist tantra,at a certain stage one is expected to select a tutelary deity; that is, a deity that is core to one’s heart practice. This deity then becomes the focus of one being, and it is not unusual for both monks and laypeople to spend a great deal of money commissioning a large painting of such deities. These scroll paintings are known as thangkas ”

Exhibited and Published:  The Art of Compassion: Buddhist Art from The Todd Barlin Collection. Sydney Australia 2018. Catalogue written By David Templeman, Page 101 where  shown on a full page.