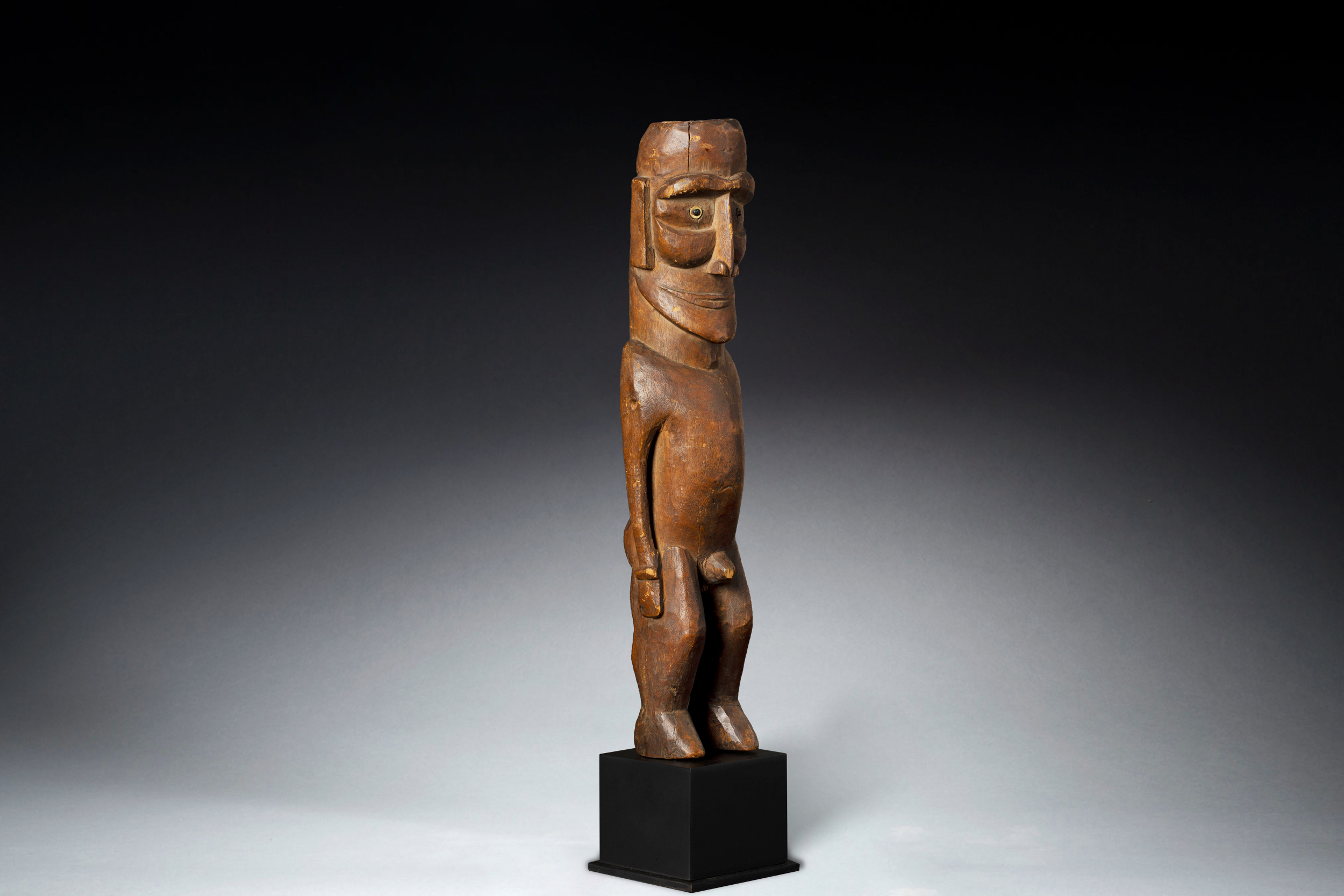 This cute little figure is a folk art figure made in Easter Island or Rapa Nui in early 2oth century.  It was made & used as a trade object for visitors stopping at Easter Island.  It has none of visual power of the old Easter Island Figures but it has some genuine charm. The figure standing male figure is not at all aggressive and it has a friendly & peaceful look.

According to Eric Kjellgren from the Metropolitan Museum of Art in New York in his essay he writes;

“Easter Island, situated in the southeast Pacific over 1,000 miles from the other islands of Eastern Polynesia and some 1,400 miles west of South America, is one of the most remote inhabited places in the world. Between 600 and 800 A.D., a group of colonists from an unidentified location in Eastern Polynesia settled on Easter Island after sailing in a southeasterly direction for many weeks. The name Easter Island originated with the European explorer Jacob Roggeveen, who first saw the island on Easter Sunday, 1722. Today, the Easter Islanders call themselves and their homeland Rapa Nui. Rapa Nui society was organized following the classic Polynesian pattern: an aristocracy composed of ranked hereditary chiefs (ariki) with political authority over the commoners, who constituted the majority of the population.

The art of Easter Island is distinctively Polynesian, much of it centring on the creation of religious images. The most recognisable art forms from Easter Island are its colossal stone figures, or moai, images of ancestral chiefs whose supernatural power protected the community. Between roughly 1100 and 1650, Rapa Nui carvers created some 900 of these sculptures, nearly all of which are still in situ.

One type of wooden image, the naturalistic male figures known as moai tangata, may depict family ancestors. Although their imagery is conventionalised, they may be individual portraits. What appears to be hair on the top of their heads is actually a low-relief carving depicting fishlike creatures with human heads and long flowing beards, possibly representing shark-human spirits (nuihi). In a number of respects, the moai tangata bear a close formal resemblance to the larger stone moai. With their enlarged heads, frontal orientation, prominent stomachs, and arms that extend down the sides of their bodies, both types of image embody a classically Polynesian conception of the human form “.